My Review Of “Sledge” 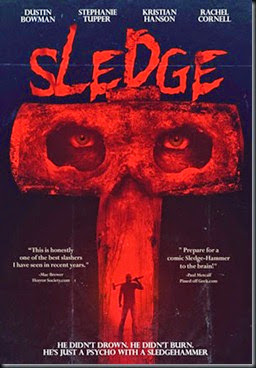 “Sledge” is a return to the classic slasher gore. The film is directed by John B Sovie II, with Kristian Hanson and stars Kristian Hanson, Russell Matoes, Dustin Bowman, Travis Hanson, Stephanie Tupper, and Rachel Cornell. The plot puts a group of campers in the direct path of a homicidal maniac whose weapon of choice is a sledge hammer. “Sledge” is a comfortable, steady slasher with great direction, backgrounds and carnage.

The story is one that is sort of cookie cutter in most slasher films, but it is a pattern to the genre that works. In “Sledge” the collection of meat lined-up for the killer are out camping and drinking and having a big ole time. Only, in this film, that story is framed by a more modern story of a young girl watching “Sledge” on a late night horror show called ‘Assly’s True American Horror’. This almost gives a blend of horror host/anthology vibe to the viewing experience. It is a unique aspect that created that comfortable air going into the story.

Now the killer on the other hand, although I dug the design, was a bit uncomfortable to watch onscreen. For me personally , the over-the-top jokey quality took away from the power that “Sledge” was generating for me. It was really the only hang up I had in this entire film. The cast gave great performances, made the characters believable and added authenticity to the story arch, instead of seeming like actors put into a situation they can’t relate to. The killer’s too hokey personality aside, did manage to create some nice slasher moments that almost makes his dialog and style forgivable.

The special effects are on the cheaper side, most indie slashers do and “get it done”. “Sledge” is no exception, the film gives good gore. The kills fun, bloody and classic. The intro effects at the beginning had me worried with the obvious CGI blood, but the energy and feel of the kill sequences and use of practical effects made everything all better for me as a horror, and slasher, fan. The atmosphere stays very casual while being very dark which really shines during the dialog/drama scenes of the cast. Reminiscent of early 80’s indie slashers, the comic relief of the killer interactions give hit and miss moments that sometimes complements the overall film and other times holds the energy back, It is really up to personal preference as a horror fan whether it all works well for you or not.

Sound effects and soundtrack both create and add eerie, entertaining levels of emotion, suspense and fun to “Sledge”. It stays organic and indie, but through most of the film sound really gives this slasher the breathe to scream. Nothing is really radically new or flipped from what we expect from our horror films in “Sledge”, but it carries you into the intensity during suspenseful moments, keeps you chill during the dramatic moments, and even during the clunky killer scenes leading to a kill, the sound manages to keep the desired effect. Really I enjoyed pretty much everything about “Sledge” except the chosen portrayal of this formidable slasher, where his personification is concerned.
Posted by A Southern Horror Fan