My Review Of ‘Hell’s Caretaker” 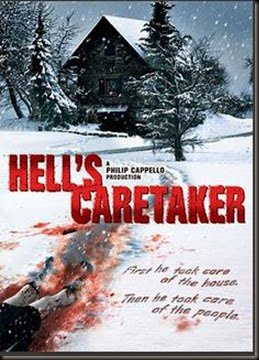 “Hell’s Caretaker” is a psychological thriller directed by Phillip Cappello and stars Patrick McGowen, Alexandra Mingione, Joey Mintz, Sean Deblat, Aya Beldi (Shapovalov). The story revolves around a group of friends who take a trip back to a family retreat in order to say goodbye to a four-legged friend. They are greeted by a horror far worse than the pain of saying good by when the caretaker turns out to be a brutal psychopathic killer.

The plot for “Hell’s Caretaker” is a well thought-out concept that screams terror. Unfortunately that terror becomes lost in translation when acted out. The cast give good enough performances, even though the characters seemed a bit two-dimensional. The dialog and most situational moments play out convincingly enough and feel authentic, but a lot of little inflections and interactions seem nonsensical-not true to human nature, so the feel of those moments drop a bit. Cappello creates a nice enough story that should have been a tight nightmare, however I never felt any suspense or chill as a horror fan while watching this film.

The special effects here are obviously where budget cuts were made in “Hell’s Caretaker” because the kill scenes seemed rushed and pushed off as “just another scene to get through”. The blood and gore was almost nonexistent, not that every film needs it or that I have to have it to appreciate a film, but if you are gonna have a story tease and take you to that moment then the director should deliver it. Cappello never really delivers on it-it being the horror and terror aspect of this film.

The soundtrack and sound effects in “Hell’s Caretaker” are quality additives offering a blend of melancholia and sorrowful nostalgia. It is really the only true nod to horror, or suspense in the film. There is slight flash gore visual affects, and flashback to the death scene moments that give a slight nightmarish quality to the story but it isn’t enough to push “Hell’s Caretaker” to that true horror or thriller level that the story arch teases. Plus the killer is never really defined separately, or terrifyingly enough, against the rest of the characters/victims to make him monstrous so it causes the kill sequences to fall flat.

Overall “Hell’s Caretaker” is a bummer of a horror film, feeling more made-for-TV than actual indie horror. It does manage to bring to life a good drama, even has a small amount of haunting suspense in certain moments of the film, unfortunately not enough to satisfy me personally. The acting is standard with characters that are clichéd but relatable and the story arch is completed. So those elements offer so compensation for the time spent watching “Hell’s Caretaker”. The real problem with the film and how Cappello chose to bring this nightmare to life is the unwillingness to show the actual horror, I am all for “implied or suggested horror” but I don’t want to have to do all the work, I wanna see some bloody gruesomeness to help get me there.
Posted by A Southern Horror Fan