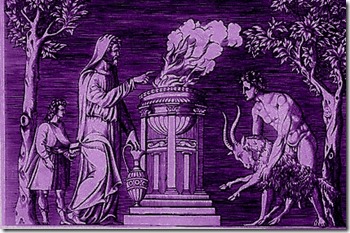 An Agonalia or Agonia was an obscure archaic religious observance celebrated in ancient Rome several times a year, in honor of various divinities. Its institution, like that of other religious rites and ceremonies, was attributed to Numa Pompilius, the semi-legendary second king of Rome. Ancient calendars indicate that it was celebrated regularly on January 9, May 21, and December 11.


The object of this festival was a disputed point among the ancients themselves, but as J.A. Hartung observed, the offering was a ram (aries), the usual victim sacrificed to the guardian gods of the state; the presiding priest was the rex sacrificulus, and the site was the Regia, both of which could be employed only for ceremonies connected with the highest gods that affected the well-being of the whole state.


1. The day may take its name from the girded priest At whose blow the god's sacrifice is felled:
Always, before he stains the naked blade with hot blood,
He asks if he should (agatne), and won't unless commanded.
2. Some believe that the day is called Agonal because
The sheep do not come to the altar but are driven (agantur).
3. Others think the ancients called this festival Agnalia,
'Of the lambs', dropping a letter from its usual place.
4. Or because the victim fears the knife mirrored in the water,
The day might be so called from the creature's agony?
5. It may also be that the day has a Greek name
From the games (agones) that were held in former times.
6. And in ancient speech agonia meant a sheep,
And this last reason in my judgement is the truth.
Translation provided by A.S. Kline: Ovid Fasti Book I