My Review Of “Torn: A Shock Youmentary” 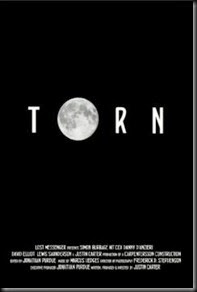 “Torn: A SHOCK YOUmentary” is a faux documentary from director Justin Carter that takes the lore of the British lore of werewolves in the countryside into the world of mockumentary/found footage storytelling. The film takes place in the Devon village of Orchardlea and stars Phil Baker, Charlotte Bird, Simon Burbage, Martin Challinor, Prudence Catley, Sam Burns,  Danny D'Anzieri and Kit Cox. “Torn” tells the story of a group of friends fighting against the belief that they are responsible for the death of one of their ilk after a vicious attack in the countryside. A documentary crew is hired to film the events leading up to the capture and kill of the creature they say killed one of their own, proving the friends innocence.

“Torn: A SHOCK YOUmentary” doesn’t really offer a new story or concept in this fake documentary but it does do one really cool thing, the film takes the creature horror of the werewolf back to the creepy countryside of jolly ol’ England, far from the pavement and sophistication of the urban lycanthrope.  Which automatically makes the story somehow seem more authentic. The beast roaming the English countryside leaving behind a wake of blood and death is timeless and classic. That is where this film centers at as a foundation. The actually character builds and story arc are less than clever, offering only a glimpse into this spooky rural world on edge as a killer runs about. Most of the film stays on the actually characters as they hunt for the beast, weaving in and out of melodrama and feign self-importance of dire situations. A lot of times in cinema when too much is implied then nothing is really implied at all. The focus on the groups situation as opposed to physical action and events to carry the moments wasn’t enough to convince me of the nightmare elements of “Torn”. Not like-say-“Blair Witch” or “Little Big Boy”.

The acting and visual concepts are met by director Justin Carter, with a lot the story almost reaching full momentum into real horror potential, there was just too much down time with unnecessary melodrama from the characters to pull off a full fledge horror situation. Mostly “Torn” is a lot of talking and very little action. I was bored through most of the film until the final act. There is a lot of dialog and situations throughout this film that seem forced or contrived which takes away from the thing being scary. “Torn” is a low budget project with some pretty nice moments and some decent acting but there was a lack of suspense or thrilling nature to the over all atmosphere that should have been there to keep me connected to the screen.

The effects and soundtrack for “Torn are both hit and miss with some moments coming off nicely while others fall flat. I am not big on spoiling a film so I am not going to call out any particular moments so that I don’t given anything away, lets just say that fake stuff shouldn’t look so fake if your gonna let the camera stay on it longer than the eye can blink. The blood worked well and the last act was intense enough which is a nice end to the mockumentary set-up. As far as the  sounds that play out in the film, I found them more off-putting than captivating. Some times the soundtrack just didn’t go with the story’s chilling intent or created a flat line effect when it was meant to chill. However with all the negative elements I experienced while watching “Torn”, I have to say that it took the sub genre serious, had a creepy concept and managed to complete the story’s arc. This one is a 50/50 for me as a horror fan, and as a fan of British horror.
Posted by A Southern Horror Fan