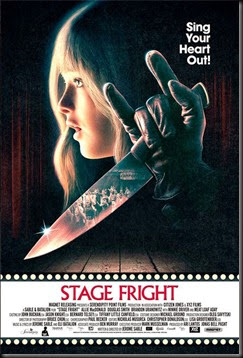 Jerome Sable’s dark musical “Stage Fright” has released two new clips. The slasher-esque/ comedy, is currently available VOD on many platforms and stars Allie MacDonald, Douglas Smith, Eli Batalion, Meat Loaf, and Minnie Driver. I haven’t seen this film yet because I really don’t do musicals, save three – “Rocky Horror…”, “The Devil’s Carnival” and “Repo” . I do plan to check this one out for many reasons…

: “Scream” meets “Glee” in this dark comedy musical about a starry-eyed teenager Camilla Swanson who aspires to follow in the footsteps of her Broadway diva mother. Instead she’s stuck working in the kitchen of a snobby performing arts camp.

Determined to change her destiny, she sneaks in to audition for the summer showcase and lands a lead role in the play, but just as rehearsals begin, blood starts to spill, and Camilla soon finds herself terrified by the horror of musical theater.