My Review Of "Windsor Drive" 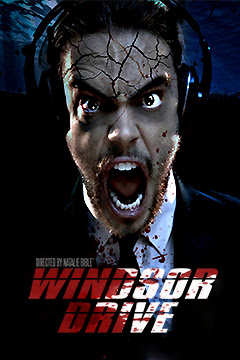 Synopsis: Windsor Drive explores the disturbed mind of River Miller, a mentally unstable 27 year old, haunted by the death of his girlfriend, Jordana. Trapped by the voices and visions in his head, River’s world begins to crumble forcing him to move to new surroundings hoping to calm his demons, but when he moves in with Wulfric and Ivy, two vampy hipsters with an agenda of their own. Everything falls apart and the deaths start again.

Now I am sure that the synopsis is what plays out in "Windsor Drive" but I am also certain that I didn't actually see it play out as simple as the synopsis alludes. Confusing? Well so is Natalie Bible's feature film debut. The story is told in fractured moments that I am pretty sure are replaying in the anti-protagonist's mind after the psychotic break. The film keeps you questioning almost everything that unfolds in this twisted bit of psychotica of a success-starved, wanna-be actor just trying desperately to get his foot in the door, even to the point of "taking care" of anyone or any problem that gets in his way. Okay so yeah, I kind of did follow the story pretty well, I am just not sure that it all really happened or was just in this dude's mind!

The cast is amazing.  Young-hot-hipster, ultra indie, retro posh actors/models that are so pretty on screen it is almost intimidating. The scenes and character development is framed beautifully with moments of David Lynch-esque drama and character interactions. The cinematography is is so well done that it is painfully obvious that the talent is beyond seasoned. Natalie Bible's direction is so wonderfully surreal and elevated that you leave "Windsor Drive" lost in a haze of having just finished some high concept performance art exhibition. These are also the things within this film that cripple the overall experience of enjoying "Windsor Drive" as just a "movie-goer".

The staging of the scenes, the high art cinematography that permeates almost every scene, the hipster-trendy, new-young-Hollywood thing, all just seem too much and ultimately take away from the story that desperately tries to be told here. Now don't get me wrong, I have most of these actors/models in several "fuckable/hottie" folders on Pinterest, this whole art film subgenre in suspense thriller is like candy to my eyes, but I would be remiss not to point out that "Windsor Drive" plays out like a weird blend of performance art-music video, and fashion print ad/ultra trendy perfume commercial. These aren't necessarily bad things to have visually entertaining your audience, but they should never over-shadow the story, the story should be the star, and in all honesty it isn't in "Windsor Drive".

Now for the trivial, but all important stuff, that for me as a basic bitch, horror fan, does or doesn't show up in the film. The special effects are non-existent beyond some clever, creative videography gimmicks common in the trade. There is no real "follow through" on the obviously hinted at death/murder/kill stuff. A splash of blood here or there, suggested moments of cruelty and psychotica, but nothing that would pull in your average thriller fan. On the plus side-and it is a big plus, actually many, many plus's. The soundtrack is indie-urban, young, and killer. It plays a major role in creating atmosphere, mood, and emotion within these scenes and the overall effect on the film. Then there is the delicious and gorgeous Matt Cohen-probably the hottest young hunk in Hollywood today! Throw in the uber-fierce femme fatale, Samaire Armstrong, and the dapper, sexy-cool Kyan DuBois-OMG! Those items alone have me sold on "Windsor Drive".  Overall the film is stellar as an avant-garde, super trendy art film with cult cinema flare, but it will disappoint with the thriller/suspense, story-driven audience.