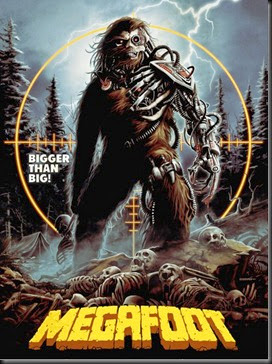 Check out the “Megafoot” tracking installation video released for the upcoming horror/action/sci-fi/creature feature. Yeah this film works it all with one killer Cyborg-Squatch story. “Megafoot” has been working a crowd funding campaign over on Indiegogo with time ticking down. There are less than 65 hours left for the campaign.

The film is directed by Writer/Director Rolfe Kanefsky with creature effects provided by Vincent J. Guastini who’s list of accomplishments are insane, working on such films as “Dogma”, “Virus”, “The Toxic Avenger Part III”, “The Devil’s Carnival” and so many more killer films-not to mention the recent revision Santa slasher “Silent Night”. 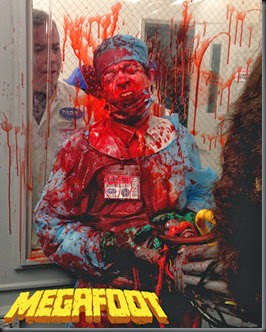 “Megafoot” is a top-secret killing monstrosity (half Machine, half Bigfoot, all Terror!), which has recently escaped from the highly covert laboratory where it was created. An elite squad of soldiers has been sent to track and destroy the sadistic sasquatch before it wreaks its horrific vengeance on the human race. Expect violence, suspense, creative kills and gore-soaked thrills in a movie that’s bigger than big… it’s MEGAFOOT!

“We wanted to show the world what the MEGAFOOT creature was capable of,” explained Justin Martell. “With only five days of the campaign left, we felt it was important to reiterate that the more people contribute to our Indiegogo campaign, the more we can achieve with a practical F/X cyborg sasquatch.”

The new promo video is a taste of things to come should they continue to receive support from their fans. So check it out below and head over to the Indiegogo campaign to check out all the perks and even more details on “Megafoot”. Plus go to the film’s Facebook page to stay up on the progress of this megabeast.