Trailer And Poster Released For “The App” 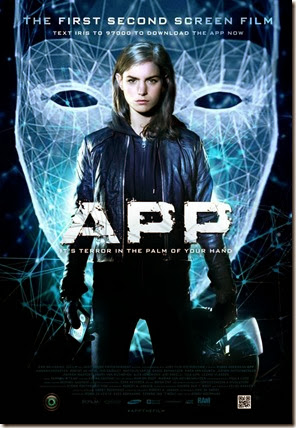 RAM Releasing, the genre shingle under New York-based distributor Film Movement, today premieres the US theatrical poster and trailer for the label’s first theatrical release since its launch in late 2013, APP.

A film by Bobby Boermans, it’s the first film made with the intentional inclusion of content on a second, mobile screen. The accompanying app, IRIS, is equipped with sonic technology that triggers additional content during the movie - off-screen text messages between characters, an alternative angle in a scene, and more. Though not required for viewing (and enjoying!) the action-packed APP, the intentional use of the second screen makes it a groundbreaking achievement in the continuing convergence of film and technology.

Anna lives with her best friend Sophie and balances psychology classes with supporting her brother and his recovery following a traumatic motorcycle accident. She’s never far from her cellphone, and after a night of partying in the dorms, Anna wakes up groggy and hung over, only to find that a new app has been inexplicably added to it.

Initially helpful and clever, IRIS soon begins behaving mysteriously, answering personal questions it shouldn’t know the answers to and sending inappropriate images to her contacts. When it becomes clear she can’t simply delete the unwanted, evil app, Anna’s efforts to confront it will set in motion a fearful series of events that will put her life, and that of her roommate and her fragile brother, in fatal danger.

APP, RAM Releasing’s first major release in a year packed with equally impressive genre titles slated for theatrical, digital, and home video distribution, opens in theaters May 9; it will be available day-and-date on all major digital platforms, including iTunes, Amazon Instant, and Cable VOD. The IRIS app - text IRIS to 97-000 to download for iPhone and Android - works in any viewing environment, from multiplex to living room. The app also includes exclusive character bios and film stills.

"RAM Releasing was created to push boundaries," VP of Distribution Rebeca Conget said. "APP challenges the bad name cellphones have gotten in movie theaters and does it in an entirely ingenious way. Boermans’ film will have you rethinking how you watch movies."