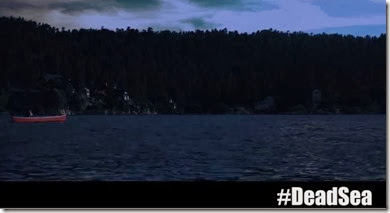 The first clip has been released for creature feature “Dead Sea”. It doesn’t really offer much, just a man in a boat, mostly likely being stalked as prey, but we only see the man in the boat and some underwater movement-not much else. “Dead Sea” is due out April 15th, 2014 on DVD. The film is directed by Brandon Slagle and stars Alexis Iacono, Britt Griffith, Jw Wiseman, Brandon Slagle, Devanny Pinn, James Duval, Chanel Ryan, Candace Kita, Jennifer Woods, Dillon Paigen, Ryan Kiser, Mel Turner.

"A Marine Biologist is thrust into the violent paranoia surrounding a town preparing for the return of a legendary serpentine creature."