Red Band Trailer Released For “Quite A Conundrum”


A red band trailer has been released for indie sensation “Quite A Conundrum”. The film is directed by Thomas L. Phillips who also wrote the screenplay for the film that is described as "Clerks meets Scream".  It stars Sasha Ramos, Erin Nicole Cline, Emily Rogers, Anthony Rutowicz, Joe Coffey, Chris Greene, John C. Lucas, Juli Piechovski, Catherine Trail and has won numerous awards on its lengthy festival run. “Quite A Conundrum” hits DVD on March 4th. 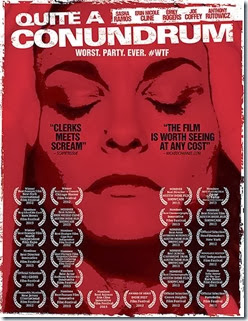 Sex, drums, tequila, social networking, a pirate, morning after pills, Jesus and a gun. It's one hot mess!

It should have been just a normal day of sex, fun, alcohol, hormones and debauchery for Tabitha and Mimi, two twenty somethings who care about nothing but themselves and what chaos they can cause. But that so-called normalcy gets tossed out the window when an unexpected and devastating event occurs at a nighttime pool party. As the alcohol begins to wear off and the body count rises, all hell breaks loose and there is no going back. As if the foul mouths, perverted attitudes and devious natures of Tabitha and Mimi were not enough, then just throw in Tabitha's walking porno of a boyfriend Sean and his new best friend, the sweet Dutch. Then mix in Mimi's eighteen year old virginal, confused and prudish sister Kylene and her sexually challenged boyfriend Harris, and the events gets even saucier. Then shoot in a splash of the old pervert Marc and his crazy unhinged wife Lola, and then toss in the Bible-thumping Jesus-freak Thelma, and it gets a little more crazy, dangerous, insane and ...


Quite A Conundrum - Red Band Movie Trailer from Thomas L. Phillips on Vimeo.
Posted by A Southern Horror Fan