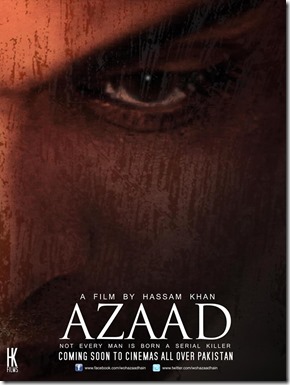 A trailer has been released for new thriller film “Azaad”. This is the second film that has come out of Pakistan that has caught my attention. The film is directed by Hassam Khan is slated for release in Pakistan. I am not sure when an International release will be issued. “Azaad” stars Hassam Khan, Hammad Siddiq, Maddi Murtaza, Shameen Khan, Arsal Hasan and Natasha Bayg.

The story focuses on Dr. Talat Ali, a forensic psychiatrist by profession who is has been given the case of Talha Zulfiqar, a serial killer charged with eight murders out of which only one dead body was found. As Dr. Talat tries to unravel Talha's case, along with the diagnosis of Fantasy Prone Personality (FPP), the events that follow are truly unpredictable.