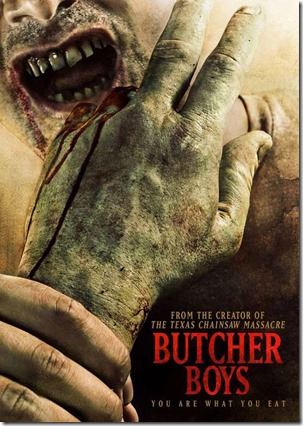 Duane Graves’ directed “Butcher Boys” has been issued a release date. The film once known as “Bone Boys” will see a theatrical release on September 6th thanks to Phase 4 Films. “Butcher Boys” from the writer/producer of “The Texas Chainsaw Massacre”, a film that set the standard for grindhouse styled contemporary horror. It [BB] stars Ali Faulkner, Johnny Walters, Derek Lee Nixon, Tory Tompkins, Gregory Kelly. Check out the trailer below and keep up with the slasher/cannibal horror’s latest on the film’s Facebook page.

A birthday celebration at an upscale restaurant sets in motion events that bring a group of friends face to face with the macabre world of cannibals, the Butcher Boys. The Butcher Boys are international predators who deal in human ­flesh - dead or alive.