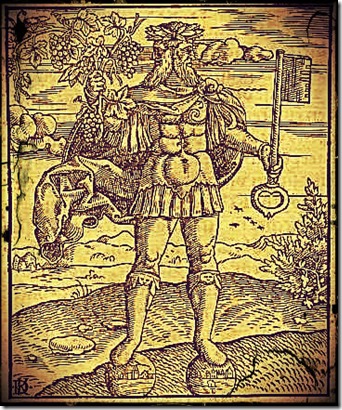 Portunus was an ancient Roman god, and the god of keys, gates and doors (porta), as well as livestock. He protected grain warehouses and barns. Eventually he also became associated with ports, and harbors (portus – gateway to the sea) as well. Specifically, Portunus protected the portus Tiberinus, a river harbor within Rome, and the wharves at Ostia. The portus Tiberinus was located near the Forum Boarium, also known as the ‘Cattle Market’. The Temple of Portunus was consecrated on August 17 in the first century BC, and still stands to this day. Quite frankly with all the home invasion horror films that have proved successful lately it may be wise to through some love to Portunus to protect the doorways and entryways into the home. Just saying maybe take some keys that you have in your junk drawer and hang over the door frames in your home or place on the ledge of the frame for protection.

Portunalia, the festival celebrated in honor of Portunus, was held annually on August 17. It was celebrated at Rome by the Pons Aemilius and also at Ostia. The Romans threw keys (the symbol of Portunus) in a solemn manner into a fire during Portunalia for good luck. During the Roman Republic, Portunus was one of the fifteen deities with an official cult. A priest (flamen) was assigned to each of the deities which were divided into three flamen maiores (major priests) and twelve flamen minores. The priest of Portunus was one of the flamen minores. The flamen Portunalis performed a ritual of oiling a spear (hasta) on the statue of the god Quirinus with an ointment especially prepared for this purpose and stored in a small vase (persillum).

Portunus appears to be closely related to the god Janus, with whom he shares many characters, functions and the symbol of the key. He too was represented as a two headed being, with each head facing opposite directions, on coins and as figurehead of ships. He was considered to be "deus portuum et portarumque praeses" (lit. God ports and gates presiding.) The relationship between the two gods is underlined by the fact that the date chosen for the dedication of the rebuilt temple of Janus in the Forum Holitorium by emperor Tiberius is the day of the Portunalia, August 17.
Posted by A Southern Horror Fan