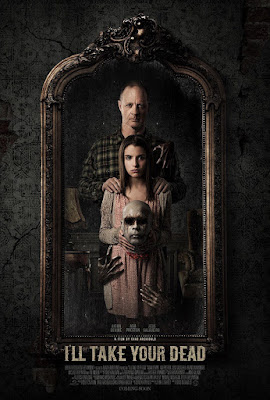 The first trailer for upcoming horror "I'll Take Your Dead" has been released. The film is being released by Breakthrough Entertainment and Black Fawn Films and is directed by Chad Archibald. It is set to premiere at the Calgary International Film Festival on Thursday, September 27th.

"I'll Take Your Dead" stars Aidan Devine, Ava Preston, Toronto International Film Festival’s 2018 Rising Star Jessica Salgueiro, Brandon McKnight, Michael Reventar and Ari Millen. It is a tale of terror that combines an unnerving crime thriller with an original ghost story. Filmed on location in Orillia and Hamilton, Ontario, the film explores the horrors of gang violence and a family that’s being haunted by the death that surrounds it.