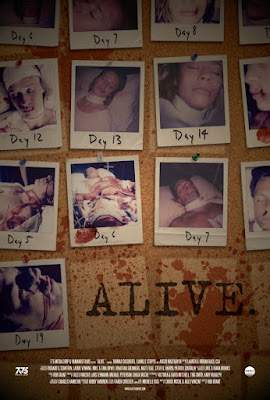 Cocquerel stars as The Male Patient, badly injured from an unknown event and trying to piece together his checkered past.Stopps stars as The Female Patient, recovering from terrible trauma and dead set on reuniting with her daughter. Stopps is a starring member of the sketch comedy show Guilt Free Zone and can be seen alongside Tim Rozon in the upcoming feature Beginner’s Luck.
Angus Macfadyen stars as The Man, a brilliant doctor who holds the keys to their freedom and the horrific answers to their past.
"Alive" is currently on the film festival circuit.
Posted by A Southern Horror Fan