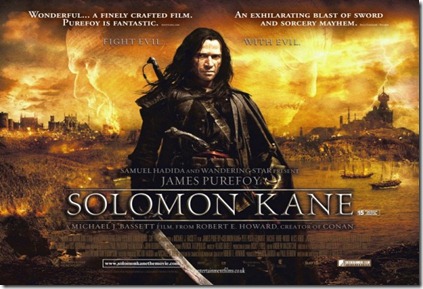 First mentioned in 2009 James Purefoy’s “Solomon Kane” finally has a U.S release date. Directed by Michael J. Bassett the film features Purefoy has a 16th century warrior battling all the forces of evil that medieval sorcery can throw at him. Also starring Max von Sydow, Mackenzie Crook and Philip Winchester the fantasy/action film will be available on VOD August 24th with a theatrical release set for September 28th.

CAPTAIN SOLOMON KANE is a brutally efficient 16th Century killing machine. Armed with his signature pistols, cutlass and rapier, he and his men unleash their bloodlust as they fight for England in war after war on all continents.
Kane and his of pillagers their way through an exotic city in northern Africa. When Kane decides to attack a mysterious nearby castle to plunder its rumored riches, his mission takes a fateful turn. One by one, Kane’s men are taken out by demonic creatures leaving him alone to face the Devil’s own Reaper — dispatched from the depths of Hell to lay claim to his hopelessly corrupt soul. Though Kane at last manages to escape, he knows that he now must redeem himself by renouncing violence and devoting himself wholly to a life of peace and purity.
His newfound spirituality, however, is quickly put to the ultimate test when he begins his journey across an England ravaged by diabolical human Raiders controlled by a terrifying, masked Overlord. After Kane fails to thwart the brutal slaughter of the Crowthorns, a Puritan family that has befriended him, he vows to find and free their enslaved daughter Meredith — even if it means jeopardizing his own soul by re-embracing his murderous talents for a higher cause. His determined search eventually brings him face to face with his family’s own deadly secrets as he attempts to save Meredith and all of England from the forces of evil.