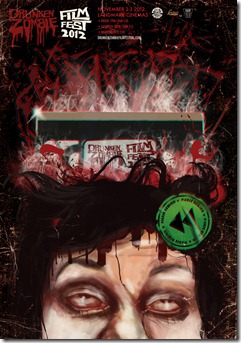 The Drunken Zombie Film Festival is proud to announce that the great horror magazine Fangoria has come on board as a media sponsor for this year’s film festival. We are happy to have such a great sponsor be a part of this year’s film festival. Fangoria has been the front runner on horror news, editorials, and horror content for the last 33 years. If you say the name Fangoria horror fans already know the type of quality you’re talking about. Fangoria will be joining the list of sponsors of this year’s DZFF including Landmark Cinemas (our hosting theater), It’s Only A T-Shirt, Crazy Dog T-Shirts, Blunt Force Cinema, and WAOE-TV MY59.

This November 2-3 is the fifth annual Drunken Zombie International Horror Film Festival in Peoria, IL and we have a great time showing off some great indie horror films. Some of the past films we have shown are Dead Hooker In A Trunk(DZFF2010), The Taint (DZFF2011), Zombie Apocalypse (DZFF 2008), Trippin' (DZFF 2010), and The Selling (DZFF2011). We present a well rounded list of films from straight up scary, to horror comedies, to the full on surreal. Every year the show is MCed by Lord Blood-Rah who is a horror host out of the San Francisco area that has a very loyal internet following.

The mission statement for the Drunken Zombie Film Festival has been to showcase great independent horror films to a horror audience that is seeking something new and exciting out of a genre that has grown stale and flaccid in recent years. We aim to help these indie filmmakers as much as we can by NOT charging entry fees, showcasing their work, and using our connections with some indie horror distributors to get them in touch with the filmmakers to hopefully get their films out on an even bigger scale. Our goal isn’t to make money off this event but to showcase great indie horror films. Come on out to the Drunken Zombie International Horror Film Festival and help support indie horror!

“The Drunken Zombie Film Festival is run by a group of diehard horror fans who's only desire is
to help out indie filmmakers and that passion shines through in their treatment of your work,
their interaction with you (the filmmaker), and their enthusiasm overall. I am very happy to
support DZ as they have been more than supportive of my career over the years and are one of
the reasons I have fans across the world.” Tony Wash – Director of It's My Party And I'll Die If I Want To (DZFF2008) and A Chance In Hell(DZFF2011)

“We had the distinct pleasure of having our film, "The Feed", screened at the 2011 Drunken
Zombie Film Festival. Though unable to attend due to a work conflict, I had a number of people
write to us saying how much they enjoyed the festival and our movie. Not only that, but a
podcast was released shortly thereafter where a whole group sat around discussing the fest -
and our film - in great detail! It was fantastic to hear. We rely quite a bit on social networking to
keep our fans up to speed on our film's progress, and the 2011 DZFF, as well as their devoted
followers, allowed us to post many, many updates. We look forward to submitting our next work
as well as attending!” Steve Gibson – Director of The Feed (DZFF2011)

"DZFF makes a real effort to reach out to its filmmakers, in order to help them connect with
each other and with industry. That's why I'll keep sending my films to DZFF. Also, their name is
really cool." Chris Walsh – Director Of Fitness Class Zombie (DZFF2011)
Posted by A Southern Horror Fan