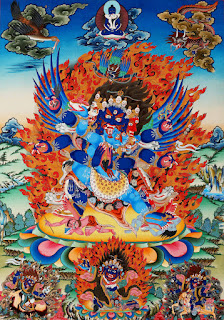 Gutor-The day before Losar Eve (29th Day of the 12th Lunar Calendar)
To Tibetans, the year's end is also of special importance and Tibetans observe Gutor while they are just two days away and busy preparing for the New Year's Day.Gutor is the day before New Year Eve and Tibetans come together on this day to enjoy themselves. Filled with the atmosphere of the year's end, Tibetan families eat Guthuk, gruel-soup with dumplings, in the evening on Gutor.“Traditionally, Tibetans say that Gutor is the only day when all Tibetans, including His Holiness the Dalai Lama, eat the same food.”The dumplings contain symbolic items or revelations wrapped inside them that might give possible indication of fortune or nature of a person whoever gets it. On opening the dumpling, one will find an "Oracle": a thread is for longevity, white wool indicates a Pure Heart, a charcoal for Black Heart, a chili might mean foul or sharp tongue etc. For a large Guthuk gathering, written note is more preferable. While soup is being served, everyone delights in showing off their "Oracle" to one another that will definitely draw in lots of funny comments- a good way to usher in for the year's end in hearty laughter.Following this, everyone participates in a religious ceremony to exorcise evil spirits from the previous year, which is the original purpose of the Gutor. Everyone puts some left over gruel soup and a fisted-dough containing a piece of clothes from one's clothes over a doll representing a fierce god. The godly effigy is then set-off with fireworks or firecrackers at a distant road junction. Doing these symbolise driving away of personal obstacles, and is believed to keep you untouched by sickness and misfortunes all through the year.

New Year Eve- NamkhanNew Year's eve itself is for cleansing houses, giving final concluding touches to the house decoration and altar offerings and, quiet relaxation and wait in anticipation for the following day's ultimate festivities. So, Namkhang puts one whole year behind. Just hours away from ushering into a new year, Tibetans look forward to Losar as a harbinger of greater prosperity and auspiciousness to start another new year all over again in a brand new way.
Posted by A Southern Horror Fan