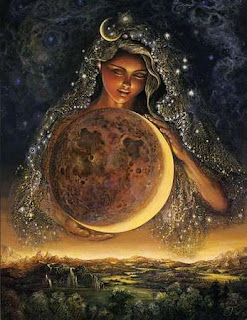 The Noumenia is a celebration of the start of a new Hellenic month (see the Hellenion calendar for the timing) and seeks blessings for the household.   Offerings such as incense or honey cakes are made to your household Gods at your family altar.  (A recipe for Honey cake is found on the Hellenion members site.)
Traditionally, the household Gods consist of Hestia, Zeus Ktesios, Hermes, Hekate,  Apollon Agyieus, your household's Agathos Diamons and can include any ancestors you honor.  However, many Hellenic Polytheists do honor more Gods at their family altar. 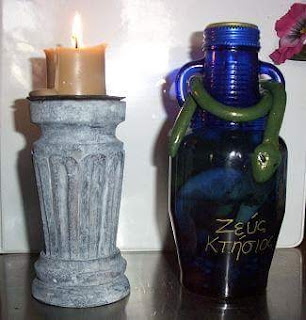 Celebrate the Noumenia with the following rituals:
What might modern worshipers do to commemorate this important day?  Like the ancient Athenians, you can burn frankincense and read the Orphic and Homeric hymns toSelēnē.  The thin crescent moon, the mēniskos, is often depicted in religious art and suggests the horns of consecration.  In the Orphic Hymn to Selene, She is said to be “bull horned” (taurokeros).

Orphic Hymn 9 to Selene says that she “Delights in stillness and in the kindly, auspicious night.”  Also, many of the Orphic hymns, and this one especially, reminds us that the arrival and passage of each new month is a reflection of the cycle of lives, with birth following the period of dark death.  So as She is “a sure token and a sign to mortal men” (Homeric Hymn to Selene), so we can trust in the cycle of rebirth and renewal.

Noumenia:
I have seen the moon
thin curved glow
hovering on delicate breeze
divine above the pink horizon
gentle horns pointing
toward tomorrow
We are all re-born now
owning no past
Yesterday is cleansed
complete
Greetings to you,
Goddess!
Guide us around
the next cycle of life
until we meet again
May we use it wisely
Posted by A Southern Horror Fan