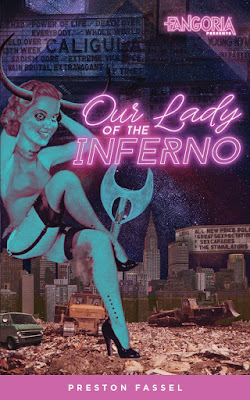 Deadline is reporting that Laura Moss and Brendan J. O’Brien have been commissioned to write the screenplay for the film adaptation to Our Lady Of The Inferno, the 1980s Times Square set horror book by journalist Preston Fassel.

Moss and O’Brien, both repped by UTA, are currently in development on After Birth. Moss is also attached to direct supernatural horror film Hide Your Eyes. Fangoria, which was acquired by Texas-based production company Cinestate, recently wrapped production on Satanic Panic.

Our Lady Of The Inferno synopsis:

"Spring, 1983. Sally Ride is about to go into space. Flashdance is a cultural phenomenon. And in Times Square, two very deadly women are on a collision course with destiny-- and each other.

At twenty-one, Ginny Kurva is already legendary on 42nd Street. To the pimp for whom she works, she's the perfect weapon-- a martial artist capable of taking down men twice her size. To the girls in her stable, she's mother, teacher, and protector. To the little sister she cares for, she's a hero. Yet Ginny's bravado and icy confidence hide a mind at the breaking point, her sanity slowly slipping away as both her addictions and the sins of her past catch up with her...

At thirty-seven, Nicolette Aster is the most respected woman at the Staten Island Landfill. Quiet and competent, she's admired by the secretaries and trusted by her supervisors. Yet those around her have no idea how Nicolette spends her nights-- when the hateful madness she keeps repressed by day finally emerges, and she turns the dump into a hunting ground to engage in a nightmarish blood sport...

In the Spring of 1983, neither Ginny nor Nicolette knows the other exists. By the time Summer rolls around, one of them will be dead."
Posted by A Southern Horror Fan