My Review Of "Krampus: Origins" 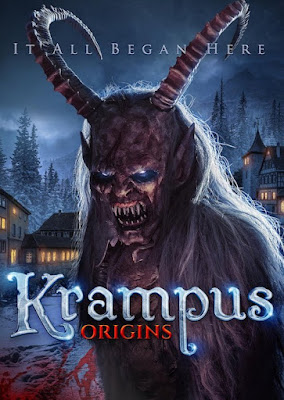 "Krampus: Origins" is directed by Joseph Mbah and written by Robert Conway, The film is the terrifying backstory of the yuletide slaughterer first introduced in Conway's "Krampus: The Reckoning". It stars Anna Harr, Maria Olsen, Amelia Haberman, Dustin Leighton.

The first World War rages on when a group of American soldiers find a mysterious artifact that can summon the ancient evil of the Krampus.  After the men are killed in action, the artifact is sent to the commanding officers widow who is a teacher at a small-town orphanage.  The orphans accidentally summon the Krampus and the teacher, and her pupils are forced to battle this ancient evil.

The story is an interesting take on the Krampus concept, although the metamorphosis of this beast, in comparison to the two previous Krampus films directed by Conway, acts more as a warrior demon of consequence than the fabled sidekick of St. Nick. It does however give a beginning to the Krampus in America mythos that Robert Conway has created. The blended period film and holiday horror story in "Krampus: Origins" is layered and compelling.

More of an occult , sorcery styled horror that happens during the holiday season,  rather than Krampus Christmas massacre folly that we are accustomed to,  "Origins" works well. The acting is good, with some strong dramatic moments. At times though, it feels a bit over-acted. The real disappointed is the sheer breath of drama versus action / horror within the movie. Nearly an hour goes by before any real events begin to happen,  and nearly as long before the star- Krampus takes center stage.

"Krampus:Origins" does offer some quality special effects moments. Some of the CGI is a bit "gamey" , there is some solid choices in the film - especially during the battle gun fire at the start,  and the moments that frame the scenes with Krampus. Also the creature design, although not conventional,  is nice. Kudos. He may not be the traditional Krampus but he is an epic Holiday demon. Overall "Krampus: Origins" disappoints on a few levels, lack of horror , overdrawn and played out drama, makes the watch frustrating,  but check it out at least once and notice the few choice moments. (2.5/5)
Posted by A Southern Horror Fan