Anna And The Apocalypse Novel Out Now Ahead Of Film Release 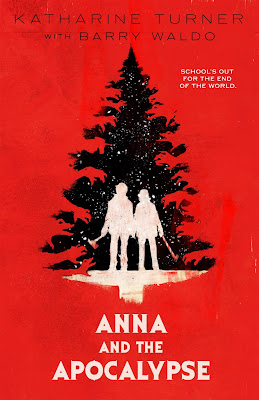 Anna and the Apocalypse, Orion Pictures’ feature film musical winning over audiences at film festivals worldwide with its humor, horror and musical dance numbers, is heading to select theaters November 30 with a national rollout to follow. Ahead of the film’s theatrical release, Anna and the Apocalypse is set to arrive in bookstores as an all-new horror comedy novel from co-authors Katherine Turner and Barry Waldo.

“Anna and the Apocalypse is a wonderfully realized world, full of strong characters, epic friendships and gripping adventure,” said the novel’s co-authors Katherine Turner and Barry Waldo. “The book gave us the chance to delve deeper into relatable, kick-ass characters and really dig into their lives and relationships. The Anna universe is so full of heart and so much fun to explore, it was just a gift to us as writers. It’s definitely the best zombie high school Christmas horror comedy book we’ve ever written!’

The Anna and the Apocalypse book, based on the original screenplay by Alan McDonald and Ryan McHenry, is available for pre-order now at major online book retailers and
https://us.macmillan.com/books/9781250318800 and will be released on October 23, 2018.

Anna Shepherd is a straight-A student with a lot going on under the surface: she’s struggling with her mom’s death, total friend drama, and the fallout from wasting her time on a very attractive boy. She’s looking forward to skipping town after graduation―but then a zombie apocalypse majorly disrupts the holidays season. It’s going to be very hard to graduate high school without a brain.

To save the day, Anna, her friends, and her frenemies will have to journey straight to the heart of one of the most dangerous places ever known, a place famous for its horror, terror, and pain…high school.

This novel is inspired by the musical feature film, Anna and the Apocalypse, produced by Blazing Griffin in association with Parkhouse Pictures and Creative Scotland, and distributed by Orion Picture in North America, Vertigo Releasing in the UK, Spendid in Germany, Pony Canyon in Japan, MovieCloud in Taiwan and various other partners around the world.
Posted by A Southern Horror Fan