My Review Of "The Heretics" 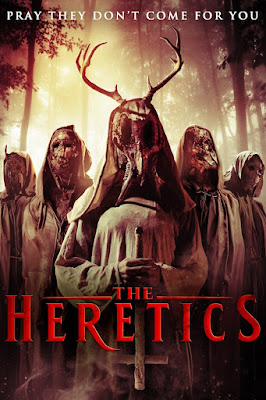 Directed by Chad Archibald, "The Heretics" is a occult / possession horror starring Nini Kiri, Ry Barrett, and Jorja Cadence. The film is a blend of folk fantasy horror and classic demonic transformation nightmare.

A young woman is abducted by a strange man who claims that a cult is hunting her. His goal is to protect her until sunrise but while restrained, she falls deathly ill. As her friends and family search for her, the source of her illness becomes more and more apparent. She's not sick…she's changing.

"The Heretics" is a complex,  layered thriller with ebbs and flows both suspenseful and chilling. The duality of to storyline seeming to mirror in pace and path collide into a familiar and terryifing union. One that puts together the puzzle pieces of this emotionally charged, part drama - all nightmare tale.

The acting and character development is a polished collection of characters that draw you into their situation completely. Aside from a few minor flaws with ansilary parts, "The Heretics" is an intense character story in horror. The cast seems well seasoned, and this movie shows Archibald's vast forward movement into becoming one of the genre's notable great storytellers.

The special effects offer quality practical moments of visceral and psychological delights, with gory,  violent and bloody scenes that work on a Hollywood level. But lest you forget while watching "The Heretics", this is a indie horror that looks and feels like a indie film. It isn't start to finish splatter fest , nor is it constant body horror, but the movie unfolds so nicely that from story, to character development,  to those so good moments of horror,  "The Heretics" is well worth the watch. (4.5/5)
Posted by A Southern Horror Fan