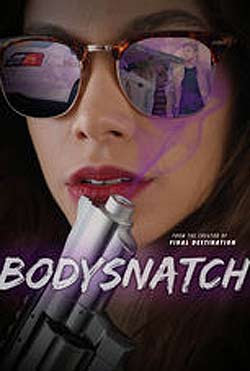 Dread Central nabbed some pretty gnarly images from Jeffrey Reddick's upcoming horror thriller "Bodysnatch" Reddick is iconically known for "Final Destination", a frightmare that still plagues me daily on these mountain roads when I have to get within half a mile of a logging truck! Check out the stills below.

Steve, a recent college graduate returns to his home town to reconnect with his conspiracy-loving best friend, Jeremy and Emma, the proverbial girl that got away. When the trio go on a ride-along with a local police officer, what starts off as a joyride turns into a fight for survival when they discover an alien invasion that threatens Indianapolis and the world.

You can order Bodysnatch on iTunes, Amazon
Posted by A Southern Horror Fan