My Review Of "Last Girl Standing" 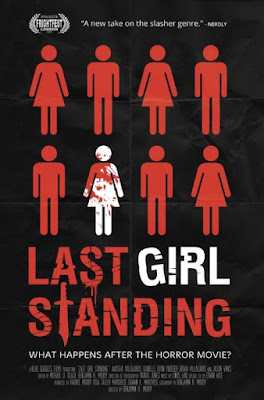 Synopsis: Five years ago, a psychotic slasher brutally murdered a group of friends. Since then, Camryn (Akasha Villalobos), the lone survivor of the masked killer, has struggled to reclaim her shattered life. Wracked with survivor’s guilt and paranoia, Camryn now leads a depressingly lonely existence until Nick (Brian Villalobos), a new co-worker, befriends Camryn and attempts to integrate her into his group of friends. Just when she might be ready to start a new life, Camryn’s past comes back to haunt her. Can Camryn ever have a life again, or is she destined to be alone?

Benjamin R. Moody's story is a dark, cynical next chapter in the final girl persona. Although the film starts with a strong, gory opening it soon turns to Indie driven character study with lofty amounts of solemn atmosphere. The cast get into their characters and for the most part give strong performances. They play up the quirky but familiar stereotypes nicely. "Last Girl Standing" goes into a deep drama mode after the first scenes, but it is an evenly paced, tense rise to a bloody climax.

The special effects are worth watching the film. It is bloody, and gory and brutal. It has all the elements of giallo, grindhouse, and splatter gore neatly tied up in one hell of a bloody third act. The middle moves toward atmospheric, and macabre thriller, but the story is strong, and the blood is gore is in your face. Definitely a big plus for "Last Girl Standing". I do think the suspense and intensity could have contained more power, but whateve, all in all this is a good, indie American giallo horror that most indie fans will dig.
Posted by A Southern Horror Fan