My Review Of 'Fear Clinic" 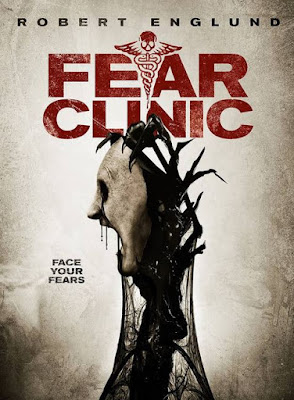 "Fear Clinic" is a fantastical forray in surrealism and fear. The film is directed by Robert Hall and stars Robert Englund, Fiona Dourif, Thomas Dekker, Brandon Beemer, Corey Taylor and Angelina Armani. "Fear Clinic" deals with familiar metaphysical thoughts surrounding fear and doorways into other realms that can be accessed once we unlock the sleeping mind. In this case exploiting fear in order to overcome phobias.

Synopsis: When trauma-induced phobias begin to reemerge in five survivors a year after their horrifying tragedy, they return to the Fear Clinic hoping to find the answers they need to get cured. Dr. Andover, a fear doctor who runs the clinic, uses his Fear Chamber to animate their fears in the form of terrifying hallucinations.However, Dr. Andover begins to suspect that something more sinister may be at work.

"Fear Clinic" is a feature adaptation of a web-series by the same name. I didn't watch the web-series but I did follow the progress of "Fear Clinic" up until the film was completed. I really look forward to seeing Robert Englund's projects that he choices. There is something classical and enthralling, in both creativity and fantasy, with the projects he chooses. This is film is no exception. "Fear Clinic" taps into those over-the-top, fantasy subjects such as tapping into our fear through science to face and overcome phobias, only to learn that fear has a form, an appetite, and fear bleeds black. It is all similar to classic philosophical tropes like "Dreamscape", "The Cell", and "Nightmare On Elm Street". Although here things are more H.P. Lovecraft than Wes Craven.

The story is a nice, exciting nightmare scenario that gives us the classic characters, a creeping, eccentric doctor, and some 'out of this world' experimental technology. The evil, or ultimate antagonist in "Fear Clinic" is unhinged demonic energy that is black, oozy, gluttonous, and terrifying. The cast give decent enough performances and the dialog is delivered nicely. Some of the scenes with character development seem more staged for theatrical purposes than for the sake of the story, but again, it all is keeping with those more, over-the-top, fantasy horror films of the 80's.

The special effects are stellar. The CGI and practical effects mix perfectly to create chilling and creepy scenes that are entertaining, Some of the shock moments fall flat but there are a few that build intense, suspenseful moments, and give good, chilling scares. The sound effects and musical score offer cool, chilling atmosphere and keep the energy dark, and ominous. I really didn't find much wrong with the special effects or creature design. Some scenes go a bit overboard with the theatrics but "Fear Clinic" is fully committed to playing with surrealism concepts.

Overall "Fear Clinic" is a cool modern horror than hearkens back to 80's VHS heydays. I thought some of the staging and conceptual scenes were a bit too much, but I liked that every moment was well thought out as far as creating visual, artistic fantasy moments from the point of view of fear and horror. The evil, or creature is creepy, Lovecraftian, and one that I would definitely fight to wake up from if I found it entering my fear chamber session. "Fear Clinic" doesn't really deal in dreams but the horror, and nightmare situations it gives us are the dreams of demons, and they dream of feeding on our fears!
Posted by A Southern Horror Fan