Trailer And DVD Details For “Wer” 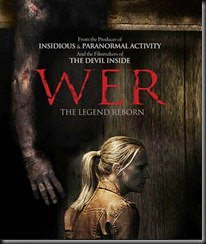 An official trailer for werewolf flick “Wer” has been released as well as word of the DVD release. The film directed by William Brent Bell will hit shelves on September 23rd, 2014 and stars A.J. Cook, Simon Quarterman, Vik Sahay, Brian J. O’Connor. Check out the trailer below.

Following the brutal slaying of an American family vacationing in rural France, a peculiar man living near the crime scene is blindly charged with their murders. Believing her client is innocent, expatriate American defense attorney Kate Moore and her team decide to take a scientific approach in order to prove his physical incapability to local authorities.

As she delves into his enigmatic family history, she uncovers evidence that suggests the rebirth of an unexpected legend. When a bloodbath ensues, Kate must do whatever she can to survive the surrounding terror and prevent the chaos from spreading.