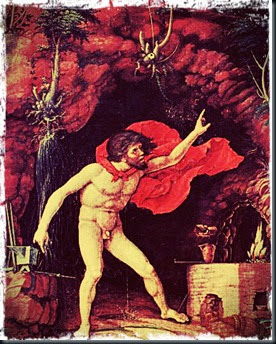 Vulcan is one of the oldest of the Roman gods, and his origins can be traced back to the Etruscan deity Sethlans, who was associated with beneficial fire. Vulcan was a god of the forge, and renowned for his metalworking skills. The Sabine king Titus Tatius (who died in 748 b.c.e.) declared that a day honoring Vulcan should be marked each year. This festival, the Vulcanalia, is celebrated around August 23.

The Volcanalia were part of the cycle of the four festivities of the second half of August (Consualia on August 21, Volcanalia on 23, Opiconsivia on 25 and Volturnalia on 27) related to the agrarian activities of that month and in symmetric correlation with those of the second half of July (Lucaria on July 19 and 21, Neptunalia on 23 and Furrinalia on 25). One custom observed on this day required that one should start working by the light of a candle, probably to propitiate a beneficial use of fire by the god.

The Vulcanalia was celebrated with large bonfires – this gave Roman citizens some degree of control over the powers of fire. Sacrifices of small animals were devoured by the flames,offerings presented in place of the burning of the city, its grain stores, and its residents. Today, many modern Roman Pagans celebrate the Vulcanalia in August as a way of honoring the fire god. If you decide to hold a Vulcanalia bonfire of your own, you can make sacrifices of grains, such as wheat and corn, since the early Roman celebration originated, in part, to protect the city’s granaries.
Posted by A Southern Horror Fan