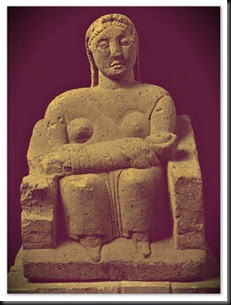 Matralia was celebrated June 11th at the temple of the goddess Mater Matuta, the goddess Aurora in the Forum Boiarum. It was celebrated by Roman matrons, matrones and , a univir a woman married only once had the privilege of crowning the cult statue of Mater Matuta. Mater Matuta was the goddess of growth, childbirth, motherhood, and the raising of children. Mothers were honored on this day by their husbands and children.

Roman matrons would bring their nieces and nephews with them to the temple of Mater Matuta. One slave was admitted into the temple, and given a blow on the cheek and then sent away. The matrons would then embrace their nieces and nephews and pray for their well-being. This was done to symbolically reinforce to the mothers that they should care for their nieces and nephews as well as their own children and shouldn’t leave them to careless slaves. Sacrifices were made to the goddess in the form of testuacia (sacred cakes) cooked in testu (earthenware). Slaves were forbidden from entering the temple or participating in the ceremonies. For the Matralia a slave, was made to enter the sanctuary and then ritually slapped and expelled by a matron.
Posted by A Southern Horror Fan