My Review Of “Kids Go To The Woods…Kids Get Dead” 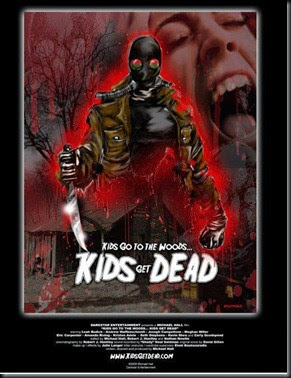 Indie slasher “Kids Go To The Woods…Kids Get Dead” is directed by Michael Hall and follows a group of friends who decide to go away for a weekend of partying, as one celebrates her birthday. They soon realize that their weekend of fun is about to become a nightmare as they are taken out by a masked killer. “Kids Get Dead” stars Leah Rudick, Andrew Waffenschmidt, Joseph Campellone, Carly Goodspeed, Meghan Miller, Eric Carpenter, Amanda Rising and Kevin Shea in a modern return to the classic format of slasher horror.

The story is a classic blueprint of dark, campy horror than never reaches the cheesy, young, half naked kids getting wild in the woods, and a slasher with a blood lust of near supernatural proportions.  The concept is classic but maintains a fresh, electric energy that never tires, and even comes with a high-concept fantasy element that plays well against the slasher set-up. Although the humor is more satirical instead of spoof, the comedic aspect of “Kids Go To The Woods…Kids Get Dead” shows a fun, wittier side to the writing that creates an attitude of modernization as opposed to retro rip-off. The direction and writing work on all levels in this entertaining slasher flick.

The acting and vision of “Kids Get Dead” is a cut above what one becomes used to with low-budget, indie horror. I was pleasantly surprised with this film, and the fantasy twist added into the story offers a perfect spice that keeps the film from becoming redundant. The cast give believable performances, even if more than a few of the characters came off as total douchebags, and a bit middle school, I connected emotionally with every character. Okay the characters are a bit cliché and stereotypical identities that plague pretty much every horror situation, but when most films fail to show plausibility or depth, Michael Hall manages to give us the cliché with heart.

“Kids Go To The Woods…Kids Get Dead” has some pretty stellar special effects in the film. The kill scenes are expect but Hall doesn’t shy away from producing the visceral, gory kills. Kill sequences that work well, give full-on carnage and look as clean as any film with a higher budget could manage. It is some impressive use of practical effects that prove low budget horror can be every bit as good as big budget horror. Honestly “Kids Get Dead” shows that the genre still has break out potential that made classic slashers worldwide phenoms. Something a lot of modern horror fail to do, use of CGI and overkill production nightmares do more to kill the organic feel of the horror genre than cheap, poorly managed indie horror.

The sound effects and soundtracks used in “Kids Get Dead” is pretty much what we have come to expect in horror. The eerie, creepy sounds mix with cool music to create the desired atmosphere needed to sell the film. The timing of certain sounds and songs at key points do feel slightly played out, but they fit the moments they frame so they work. The choice of music is pretty rock’n’roll and does offer an electrifying feel to the story. Honestly throughout the whole film all I could do was feel renewed excitement for the indie horror genres potential. “Kids Go To The Woods…Kids Get Dead” is a great slasher that will please any horror fan and would easily turn on some new fans to the community. It is a must watch fright flick that comes with it's very own horror host.
Posted by A Southern Horror Fan

I really liked your article and the photo is super. Thanks you.

Thank you for this post. This is very interesting information for me.