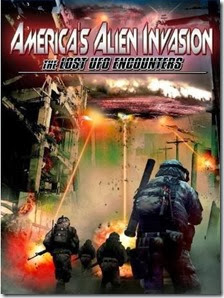 “America’s Alien Invasion: The Lost UFO Encounters” is a 2012 documentary that is a bit misleading based on the title. Yes it touches on the UFO encounters since the 1800’s in America, briefly but it never really exposes or gives us these “lost” encounters that the title taunts. It basically makes a power-point inspired presentation of someone’s added “two cents” about the UFO phenomenon in America. It really comes of more as some sort of essay or thesis based on the information already known, revealed and discussed to the level that it would only be new to someone who hasn’t hit puberty yet and still plays with toy dinos or cars, or maybe someone who has had their head in the sand for the last untold number of years. This stuff wasn’t new to me, nor I imagine would it be new to anyone with cable and a vague interest in alien or UFO information.

“America’s Alien Invasion” does offer some very nicely done illustration and art concept material instead of the more known representations of the material available that is commonly used with the events mentioned, it does offer a complete thesis of what is possibly taking place with this unexplained phenomenon, and is very specific to the situation with American alien encounters. What this documentary does not do is what the title suggests. It doesn’t focus specifically on an invasion plan directly, it doesn’t give us any “lost” files or incidents and it doesn’t seem to be a legitimate attempt to add to the cultural discussion beyond a desire to maybe cash in on the topic by taking advantage of UFO enthusiasts’ impulse to discover something new. A person would be better off tuning into the “Ancient Alien” series or purchasing the myriad other documentaries that actually do offer exploratory material in a hope to expose or shed light on the subject of aliens and UFOs. This is just a very wordy, lecture about a single belief from a vaguely informed point of view. Save your coins.
Posted by A Southern Horror Fan