Check Out The Teaser Trailer For Horror Anthology “Solitude” 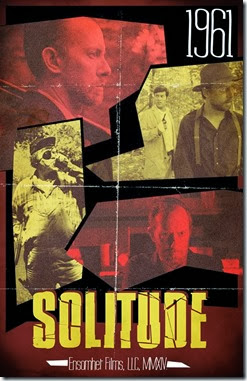 A teaser trailer has been released for indie horror anthology “Solitude”. Directed by Taylor Scott Olson, Livingston Oden and starring Armin Habibovich, Victoria LaChelle, Brent Latchaw, Alex Cotant, Glen Stone, Kelly Lavasseur, Amy Correll, Nicole Kruex Solitude will take place over a span of 75 years on a mysterious riverfront piece of land where an ancient evil dwells. The story will be told in six segments, each of them taking place in a different time period and each of them made to look like horror films of when they take place. Check out the teaser below.

In 2014, James Erikson finds an old storage locker filled with journals and newspapers of his family's history. As he researches it, he finds out about the evil that his family has tried to contain for several generations.

This leads into the other segments of the film starting with 1935 all the way to 1999. 1939 - Frank Erikson is a scientist doing research in North Dakota when a mysterious monster attacks his research team. This will be reminiscent of classic monster movies of the time period, such as "The Mummy" or "Frankenstein". 1961 - Frank Erikson returns to the Solitude River to try to destroy the monster once and for all. This segment is influenced by Alfred Hitchcock's films, as well as other B-movie's of the 50's and 60's. 1977-Donald Erikson, Frank's son, is a real estate broker and is planning on building river homes in Solitude, but does not realize what the land holds. It is in the style of supernatural horror films of the 70's, such as "The Omen" or "The Exorcist". 1986 - And here's the slasher! A group of college friends are planning on spending a weekend camping and partying near the Solitude River, not knowing of the evils that dwell there. This segment takes influence from classic 80's slashers such as the "Friday the 13th" or "Nightmare on Elm Street" series. 1999 - The last segment before present day is going to be found footage, similar to "The Blair Witch Project". It follows a group of film students who heard the rumors of the deaths near Solitude and are shooting a documentary about them.