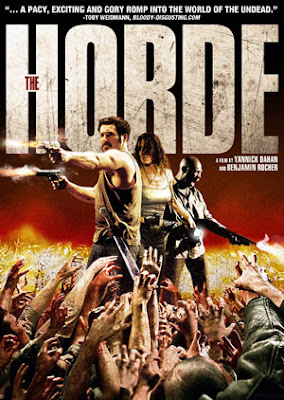 Cops battle criminals and things get even bloodier when the living dead show up in THE HORDE (LA HORDE), a French gorefest from directors Yannick Dahan and Benjamin Rocher. Set for Stateside DVD release later this year.

THE HORDE follows a quartet of police officers who set out for revenge against a vicious gang that murdered one of their colleagues. They get the tables turned on them, but the confrontation is interrupted when a zombie plague overtakes the city, trapping the good guys and the bad guys in a tenement building where they have to unite to survive. The DVD, to be released December 21 by IFC Films and MPI Media Group, is scheduled to include the following supplements:
• Making-of featurette
• Short-film prequel RIVOALLAN
• Deleted scenes
• Alternate opening
• Drawing studies for the zombies and sets
• Poster projects
• Storyboard extracts
• French teaser
• U.S. trailer
Retail price is $24.98.