Dracula The Un-Dead by Dacre Stoker 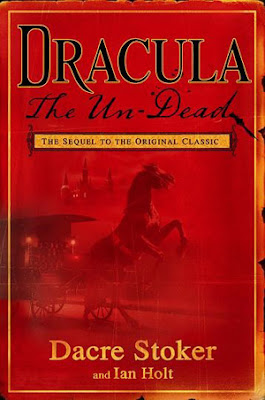 DRACULA THE UN-DEAD, is a dark-fiction novel that functions as a somewhat authorized, direct sequel to the original tale and a deepening of the mythology.
In this sequel to Bram Stoker's Dracula, his great-grandnephew offers one of the rowdiest revisionist treatments of the most influential vampire novel ever written. In 1912, as Stoker labors to adapt Dracula for the stage, its characters are dying gruesomely all over London. It turns out they are as real as Stoker himself, who learned their secret story on the sly and took creative liberties when turning it into his popular penny dreadful. Dracula's true story involves the passing of his blood line through Mina Harker to her son; a malignant Dr. Van Helsing, who Scotland Yard suspects had a hand in the murders attributed to Jack the Ripper; and the exploits of a 16th-century vampire countess, Dracula's former lover, who cuts a bloody swath through London seeking the survivors of Dracula's last stand in Transylvania. Energetically paced and packed with outrageously entertaining action, this supernatural thriller is a well-needed shot of fresh blood for the Dracula mythos. (Oct.)
Copyright © Reed Business Information, a division of Reed Elsevier Inc. All rights reserved.
amazon.com
Posted by A Southern Horror Fan