The Reapers Are The Angel - Alden Bell 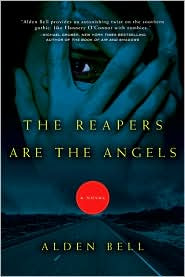 Zombies have infested a fallen America. A young girl named Temple is on the run. Haunted by her past and pursued by a killer, Temple is surrounded by death and danger, hoping to be set free.
For twenty-five years, civilization has survived in meager enclaves, guarded against a plague of the dead. Temple wanders this blighted landscape, keeping to herself and keeping her demons inside her heart. She can't remember a time before the zombies, but she does remember an old man who took her in and the younger brother she cared for until the tragedy that set her on a personal journey toward redemption. Moving back and forth between the insulated remnants of society and the brutal frontier beyond, Temple must decide where ultimately to make a home and find the salvation she seeks.

Alden Bell is a pseudonym for Joshua Gaylord, whose first novel, Hummingbirds, was released in Fall '09. He teaches at a New York City prep school and is an adjunct professor at The New School. He lives in New York City with his wife, the Edgar Award-winning mystery writer, Megan Abbott.
Posted by A Southern Horror Fan