Art of The Nasty-Fully Revised and Updated Edition 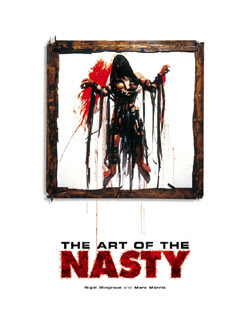 FULLY REVISED AND UPDATED EDITION!. This brand new FAB Press edition has more than 100 new video nasty sleeves, which were not included in the original pressing, to increase the total number of videos covered in the book to almost 450. In addition, the text has been thoroughly revised and updated to reflect the knowledge gained about this era in the intervening 10 years since the book was first published. And this time the book is in hardback format to ensure its long-lasting durability.
The Art of the Nasty explains and conveys the media furore, fear and the rush for political legislation that greeted the arrival of uncensored horror films on video in the UK. The hysteria was generated and fuelled as much by the sleeves and marketing as by the films themselves. In fact, many of the biggest critics of the 'nasties' only ever saw the sleeves. Some of the early video sleeves are indeed an unbelievably bold and over-the-top mixture of outrageous graphics and in-your-face visual shock tactics, guaranteed to offend.
Banned by an Act of Parliament after a frenzied and hysterical press campaign, the video nasty was deemed at the time to be a threat to society...
...(find out more)
Posted by A Southern Horror Fan