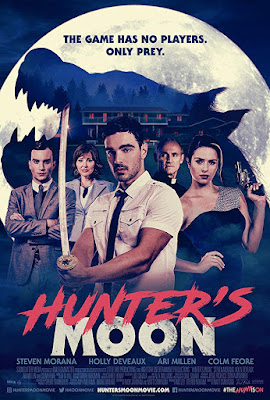 Check out the official trailer for upcoming horror "Hunter's Moon". The film is directed by Matthew Campagna, Steven Morana and due out on DVD March 24th. It stars Steven Morana, Holly Deveaux, Ari Millen, Colm Feore (The Prodigy) and Art Hindle (The Void; Offspring; The Brood; et al).

A lavish launch party for a new gaming app "Werewolves Awaken" has all the media bigwigs in attendance. The young lead developer, August, is promoted as the star talent driving the game's launch. The festivities are interrupted by a priest who condemns the party guests as "marked for the beast." Convinced it's a publicity stunt, the party-goers disregard the protest until a dead body is found.