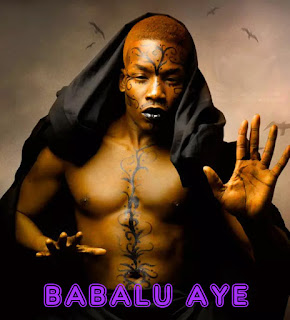 Babalu Aye is simultaneously one of the most feared and revered Orishas in Yoruban tradition. Presiding over the powers of life and death, his influence was so widespread that his worship grew from a single tribe in West Benin to many tribes all along the western coast of Africa. He is the patron deity of those who are suffering from sickness or infirmity. His domain is twofold -- he can cure the sick, and send illnesses as punishment for the wicked.

Babalu Aye's shrine is a terracotta pot adorned with cowrie shells. It is kept in a dark, quiet place where he will not be bothered, along with 18 loose cowrie shells used to communicate with him in diloggun divination. Call on Babalu Aye in times of sickness, whether to heal the sick or send those who cannot be cured peacefully to their deaths. Although he is feared for his power to give and take away illness, he is also a happy and merciful deity.
Make offerings of his favorite foods: roasted or popped corn, beans, or other grains. Rum, tobacco, or dry white wine are also appreciated. Peanuts and sesame seeds are taboo. Animals associated with him are vultures, buzzards, and other carrion birds, and his gemstones are  bloodstone, tanzanite, snowflake obsidian, and jasper.
To communicate with Babalu Aye, recite the following prayer:
"God of the epidemics and the sick.I pray to you now, have pity on us your children. Oh, glorious father, keep sickness away from my home, and protect your children from epidemics. Thank you my father."
Posted by A Southern Horror Fan