A new poster has been released for upcoming horror from IFC Midnight, "Trespassers". The film is directed by Orson Oblowitz and stars Angela Trimbur, Janel Parrish, Fairuza Balk, Jonathan Howard, and Zach Avery. Tresspasers arrives in theaters and On Demand on July 12th. 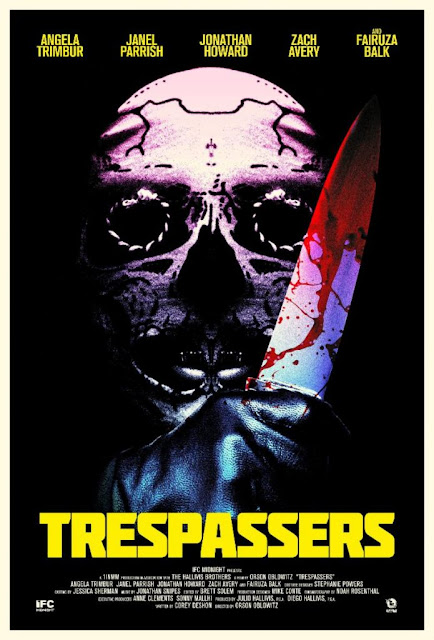 Two couples, each working through relationship issues, rent a gorgeous house in the desert for a sex and drug-fueled escape from reality. Sarah and Estelle are longtime best friends looking forward to reconnecting after a period apart; their boyfriends, Joseph and Victor, however, are immediately wary of one another. As tensions escalate over the course of a debaucherous night, things take an unexpected turn when a woman claiming to be a neighbor with car trouble shows up at the door. She seems harmless enough…or so they think. As the twists and turns pile up so does the body count in this stylish, blood- and neon-soaked thriller which hits with the furious force of a machete to the skull.
Posted by A Southern Horror Fan