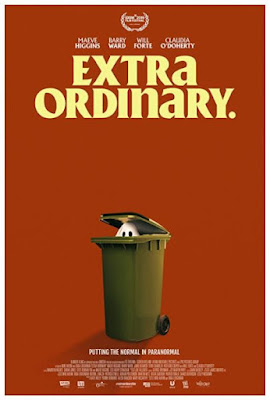 Cranked Up Films, the genre-leaning arm of Good Deed Entertainment, announced today that they have acquired North American distribution rights to the supernatural comedy, Extra Ordinary from Epic Pictures.

The Irish film follows Rose (Maeve Higgins), a sweet small-town Irish driving instructor, who is gifted with supernatural abilities. Rose tries to ignore the constant spirit-related requests, but when Christian Winter (Will Forte), a washed up rock star who has made a pact with the devil for a return to greatness, puts a spell on a local teenager, her terrified father, Martin Martin (Barry Ward) asks Rose to help save his daughter. Rose has to overcome the fear of her supernatural gift and work with Martin to save the girl, get the guy, and be home in time for a light snack.


Filmed on location in Ireland, the debut feature from co-writers and directors Mike Ahern and Enda Loughman. The cast includes Maeve Higgins, Barry Ward, and Will Forte.

“We’re so excited to share Extra Ordinary with audiences. The film had a wonderful response at SXSW and we are delighted to release this genre-bending film with fans of horror, romance, and comedy alike.” said Scott Donley, CEO and Founder of Good Deed Entertainment.
The film is produced by Blinder Films, in co-production with Umedia, and financed by Screen Ireland, UMedia and Inevitable Pictures. The deal was negotiated by GDE’s Kristin Harris and Brandon Hill with Endeavor Content.
Extra Ordinary premiered in March of this year at the SXSW Film Festival and will be released In Theaters in Fall 2019.
Posted by A Southern Horror Fan