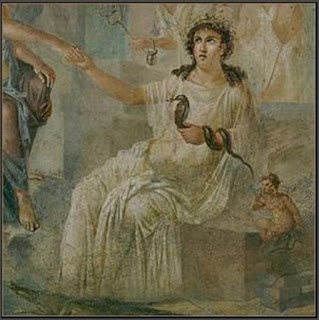 Goddess Maia was one of the Goddesses known as “Bona Dea” or Good Goddess whose rites were restricted to women. Maia was the ancient and original name of the original Bona Dea whose name was so sacred it was forbidden to be spoken aloud. Maia was worshiped throughout Greece and Italy, and She had a large following in Marseilles.

Maia is an Earth Goddess of springtime, warmth, and increase. Her gentle heat causes growth.  When the Goddess Calistro was transformed into a bear, Maia took on the task of raising Calistro’s son Arcas.  Maia was a solitary Goddess who preferred to live alone in wild caves far from civilization.  It was her son, Hermes who was continually plotting to advance himself and Maia to Olympus.


ICONOGRAPHY: Her image appears on coins from Phenos, Arcadia
BIRD: Dove
ANIMAL:  Pig
ELEMENT: Earth
CONSTELLATION: Pleiades
TIME:  The month of May. The 1st and 15thdays of the month
ALTAR:  Place Her Altar within a cabinet or cave-like space.
OFFERINGS: Honey, cookies, and pastries in the shape of pigs
Posted by A Southern Horror Fan