My Review Of "Between The Trees" 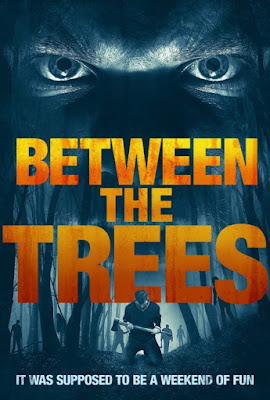 "Between The Trees" is an evil-in-the-woods" , survival horror somewhere In the underbrush between films like"Wrong Turn" and "Madman". The film is directed by Brad Douglas and stars Greg James, Michael Draper, Jonny Lee and Dan Kyle.

Steve, suffering from a collapsing marriage, invites his three closest friends on a weekend retreat to the mountains only to discover his real troubles are in the trees that surround them. They encounter a deranged killer and their fun weekend becomes a deadly fight for survival.

The story teases a cryptoid style horror but that is only in the dialog at the beginning between the main characters. I thought it was going in. It was not. What unfolds is a nicely concealed, layered horror story that brings hints of "madman" and "mutants". Douglas does a good job of regulating how much of the deeper plot elements get revealed. At some level the complexity of the movie elevates the experience of watching the story unfold.

The cast is fully committed to the characters. Unfortunately they are not developed to the level that makes you connect with them. They are thinly veiled stereotypes, overdrawn. None are likeable. Still, "Between The Trees" has some stuff happening that is interesting, and there is some atmosphere that keeps your attention. It does go left midway when some comic relief appears- and falls flat.

Special effects, minus CGI gunfire, stays practical. It is pretty good work and, even though it is limited, is a pleasure to see onscreen. The creature design and concept is a bit lackluster, kind of like a theme park mutant from a haunted attraction. Still the idea of It all is chillingly delightful. Overall, "Between The Trees" has as much working in its favor as it has going against it. It's worth checking out and despite it's flaws it is mildly enjoyable. (3/5)
Posted by A Southern Horror Fan