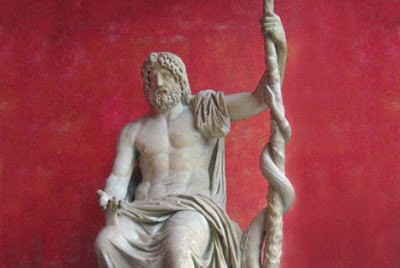 On the eighth day of Elaphebolion, the Asklepieia (Ἀσκληπίεια) was held in honor of Asklēpiós, who was honored monthly on the eighth. The Asklepieia is linked to the Epidausia, celebrated six months later, as both were special days where those in the medical profession--as well as those seeking medical counsel--made sacrifices to Asklēpiós.

The first of the festival days was spent preparing for the actual festival. The second day, religious exercises were undertaken. All temples and shrines were richly decorated and sacrifices were made to Apollon, Asklēpiós, Artemis, and Leto. Perhaps and the children of Asklēpiós--Hygieia (health, cleanliness, and sanitation), Iaso (recuperation from illness), Aceso (the healing process), Aglaea (beauty, splendor, glory, magnificence, and adornment), and Panakea (universal remedy)--also received sacrifice. Apollon received the first offering along with Asklēpiós: a cock, the fowl associated with Asklēpiós. They also received barley meal, wheat, and wine. Asklēpiós was then gifted a bull, a second bull was sacrificed to His male associates, and a cow to His female associates.

On the eve of the third day, a statue of Asklēpiós was driven through the precinct, and followed by torch-bearers and priests, who sung hymns to Him. The priests sang and spoke the praise of the Theos. There were vigils throughout the night, and during the daylight hours of the third day, there were feasts. The succeeding days were given up to athletic contests in the stadium, races, wrestling contests, singing contests and theater performances.
Posted by A Southern Horror Fan