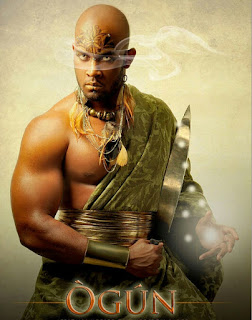 Ogún (Oggún) is the owner of all metals and minerals, especially iron.  He's associated with knives, machetes, nails, metal tools, firearms and other weapons, as well as mountains. Generally, he's portrayed as a solitary blacksmith or ironmonger who lives alone in the forest.  When the Orichas came to earth, In Santería and Palo, Ogún is syncretized with Saint Peter, Santiago, Saint Paul, and John the Baptist;

Ogún is the patron of all those who work with metal, mechanics, engineers, policemen, soldiers, surgeons.  He knows the secrets of the natural world and can perform powerful witchcraft when the situation calls for it.  He has a violent, brusque nature, but he also has a more peaceful side. He's good at farming, raising animals and hunting.  Ogún is also the owners of keys and locks, jails, and chains, and he's the foundation on which everything is built.

Acaçá is a ritual food offered to all gods in the Candomble pantheon; it is made of a paste of corn mash steamed in banana leaves. Feijoada, a stew of beans with beef and pork, is also a common offering to Ogum.

In Haitian voodoo Ogun is known as Ogou.He is also the god of pioneering, intelligence, justice, medicine, and political power; these are associated with the symbol of the tool that can "advance humans' mastery over the environment.

*The ritual aspects to honor Ogun consists of animal sacrifice. I don't do that, will not post it here. Find a symbolicmeans to act as a sacrificial proxy.  Offerings of rum,  a small tool,  red cloth,  black and white candle and a small metal weapon or statue of a warrior should work. Add it to altar with bowl of ceremonialfood. 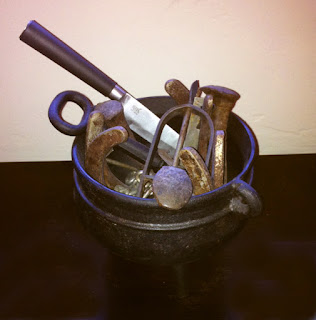 A Yoruba Praise-Poem from Nigeria.


Ogun kills on the right and destroys on the right. Ogun kills on the left and destroys on the left.Ogun kills suddenly in the house and suddenly in the field. Ogun kills the child with the iron with which it plays.Ogun kills in silence.
Ogun kills the thief and the owner of stolen goods. Ogun kills the owner of the house,and paints the hearth with his blood.
Ogun is the forest god.He gives all his clothes to the beggars.He gives one to the woodcock – who dyes it in indigo.He gives one to the coucal – who dyes it in camwood. He gives one to the cattle egret – who leaves it white.
Ogun’s laughter is no joke.His enemies scatter in all directions.The butterflies do not have to see the leopard –As soon as they smell his shitThey scatter in all directions!
Master of iron, chief of robbers,You have water, but you bathe in blood.The light shining in your faceIs not easy to behold:Ogun, with the bloody cap,Let me see the red of your eye.
Ogun is not like pounded yam:Do you think you can knead him in your handAnd eat of him until you are satisfied?Do you think Ogun is something you can throw into your capAnd walk away with it?
Ogun is a mad godWho will ask questions after seven hundred and eighty years.Ogun have pity on me:Whether I can reply or whether I cannot reply: Ogun don’t ask me anything!
The lion never allows anybody to play with his cub.Ogun will never allow his child to be punished.Ogun, do not reject me!Does the woman who spins ever reject a spindle? Does the woman who dyes ever reject a cloth? Does the eye that sees ever reject a sight?Ogun, do not reject me.