My Review Of "Nightworld" 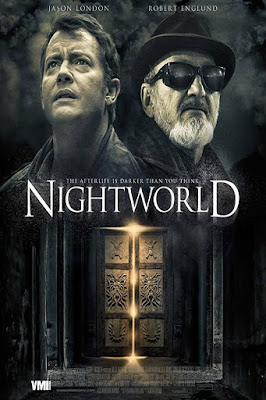 "Nightworld" is directed by Patricio Valladares and stars Jason London,  Robert Englund,  Gianni Capaldi and Lorina Kamburova. The film is a Euro-horror filled with heavy,  stylized atmosphere both Gothic and ghosty. It plays of tempered elements of Italian horror masters like Fulci with weak results.

When former LAPD officer Brett Anderson takes a job as head of security at an old apartment building in Bulgaria's capital, Sofia, he soon begins to experience a series of bizarre and terrifying events. Once he begins to delve deeper into the building's sinister history and investigate its shadowy owners and past employees, Brett soon uncovers a malevolent force nestled deep in the bowels of the building that will do anything to be set free into our world.

The story is a classic ghost story with the notable presence of mid-20th century megalomania in that the big bad has an apocalyptic agenda against humanity. The film is saturated with spooky atmospheric moments built on Eurocentric melodrama. Think Eastern European soap operas. London gives a credible performance in the lead which almost makes you wonder why his career did a 180 all those years ago. Englund sadly gives a mediocre performance that shows either an issue with script or money. My guess is script material which almost seems to phone it in.

The special effects are limited and subpar at best, driven by eerie, creepy music and Gothic spectacle that doesn't quite get you there. Practical and CGI FX work barely meets basic cable paranormal shtick found on almost all networks. Shadows, ghosty sounds and low budget horror are the soup-du-jour. Most fall flat and by no means give fright.

Overall "Nightworld" doesn't really do much for the paranormal genre other than provide a nice slice visual beauty that can be found in Eastern Europe. London'so performance, as good as it was, isn't enough to entertain and the scare-adjacent theatrics are "too little to late". Englund adds a little value to fans looking to have all his projects adorn media shelves,  but "Nightworld" only warrants the standard once-over. (2/5)
Posted by A Southern Horror Fan