"House Shark" Finally Gets Release In Time For Shark Week 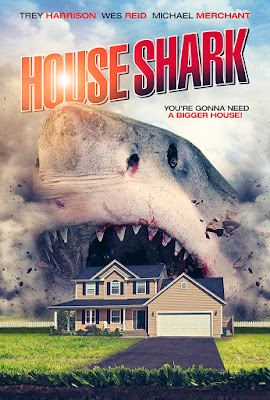 It has been awhile since we heard anything about Ron Bonk's "House Shark". And now we finally have an announcement about the creature feature's long awaited release. The news came out with a new trailer and artwork. Check it out below.


House Shark” will be in retailers across North America as well as online giant Amazon.com, as well as several VOD outlets including Cinedigm, Cool Nerd Kiosk, Google Tvod, Indemand, Hoopla, Xbox, and Vubiquity among others. It is also set for release in Japan with deals closing soon for Germany, India & Malaysia.
“House Shark” was produced by Howard Gromero (“Ms Cannibal Holocaust”), Jonathan Straiton (“Night of Something Strange”) and Tim Ritter (“Truth or Dare: A Critical Madness”). The score was composed by Emmett Van Slyke (“She Kills”) with special effects by Marcus Koch (“100 Tears”, “American Guinea Pig” series).
You’re gonna need a bigger house! When Frank (Trey Harrison) finds his happy home under attack by a dangerous but largely unknown breed of shark, he’s enlists the aid of the world’s only “House Shark” Expert, Zachary (Michael Merchant), and a grizzled former real estate agent, Abraham (Wes Reid), to embark on a desperate quest to destroy the beast and claim back his life. It’s JAWS in a house! From writer/director Ron Bonk (“She Kills”, “Clay”).
Posted by A Southern Horror Fan