Concept Media announced their “Carrie” fan-film, in production, will be released later this year . “SHE BURNS IN HELL: Accounts from Chamberlain, Maine” is inspired by the closing chapters of Stephen King’s novel, the short exploring the stories of the citizens that survived their encounters with the unhinged telekinetic on Prom Night. 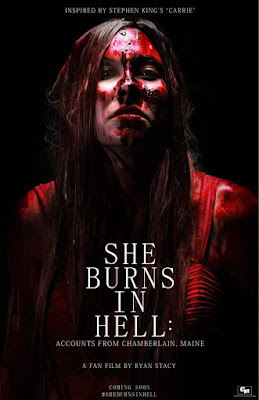 Written and directed by Ryan Stacy, the film is set on the night of May 26, 1979 and features period vehicles with costumes created by producer JJ Phillips, author of the novel Parental Bloodshed. Phillips co-produces with Concept Media co-founder Shawn Burkett, Stacy, and Chris Gierowski.

"She Burns In Hell" stars Brittany Blanton (Don’t Fuck in the Woods, Failing Grace) as Carrie White. Picking up just after Carrie has left the high school in flames, the townspeople of Chamberlain, Maine all experience peculiar & horrific phenomena…especially those unfortunate enough to be nearest her.


“SHE BURNS IN HELL” will be available digitally, completely free to stream on YouTube later this year. The film’s official Twitter account (@she_burns) is live with any further details to come there.
www.conceptmediallc.com
#SHEBURNINHELL
Posted by A Southern Horror Fan