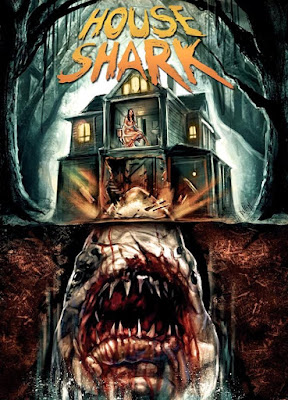 SRS Cinema is proud to cast out the first teaser trailer for Ron Bonk’s “House Shark”.  The movie is in production now with more shooting blocks planned in the next few months.

“When Frank (Trey Harrison) finds his happy home under attack by a dangerous but largely unknown breed of shark, he's enlists the aid of the world's only "House Shark" Expert, Zachary (Michael Merchant), and a grizzled former real estate agent, Abraham (Wes Reid), to embark on a desperate quest to destroy the beast and claim back his life. It's JAWS in a house!”

From writer/director Ron Bonk and produced by Ron Bonk ("She Kills") & Jonathan Straiton ("Night of Something Strange"), it stars Wes Reid, Trey Harrison and Michael Merchant.  The soundtrack will be composed by Emmett Van Slyke and the monster mechanics and gore FX will be handled by Marcus Koch.  Ron Bonk describes it as both a love letter to the late 70’s blockbusters from Steven Spielberg, but also a homage to the great monster/horror flicks of the 70’s and 80’s.

“House Shark” is about to launch an Indiegogo campaign,