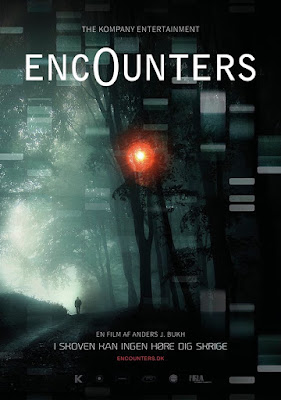 The Danish sci-fi/horror "Encounters" is being tauted as the scariest found footage out there, and proof the subgenre is not dead! "Encounters" is directed by Anders Johanne Bukh and stars Kristian Fjord, Casper Sloth, Jacob Wagner Guldager, Signs Mathilde Sorenson. Check out the recently released trailer below.

In 1981 an unexplained phenomenon began to spread. In Norway, at Hessdalen, mysterious lights were seen in the sky. In 2010 the phenomenon spread to Sweden. Strange sounds from the sky was reported. In 2012 Swedish divers discovered a huge object deep down at the bottom of the Baltic Sea. The object is said to be of unnatural origin. Nobody has been able to explain the mystery...until now... On November 18, 2011 a small Danish film crew disappeared without a trace in the northern Swedish forests. A year later, the filmmakers material was leaked by hackers, now known as Pandora. This is the disturbing footage.