My Review Of “Avenged” 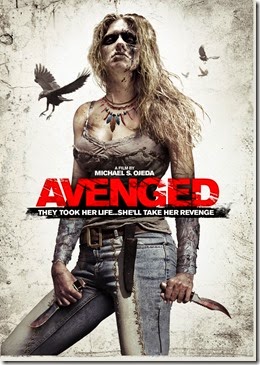 Michael S.Ojeda’s “Avenged” is a post-modern battle cry against the monstrosity of bigotry. The film blends elements of exploitation-revenge horror with classic, supernatural-action. “Avenged” stars  Ronnie Gene Blevins, Rodney Rowland, Willow Hale, and Peter Sherayko in a nightmarish tale that sees a young deaf woman crossing paths with some of the worst humanity has to offer. Witness to the brutal murder of two Apache men, Zoe is abducted, raped and left for dead. But the supernatural power to be avenged reaches beyond this reality exact primitive justice on the men who did this to her. “Avenged” can best be described as “I Spit On Your Grave meets The Crow”.

The story that Ojeda has created around this supernatural transformation of a sexual assault victim is powerful, compelling, and emotional. “Avenged” becomes a complex multilayered story with characters rich in dimension. From the beginning I felt the fear rise in me for what was to happen to Zoe-that just on the exploitation-revenge horror side of this story which dominates the first piece to this story. I also hated the notion that the GTO was gonna be brutalized, luckily that didn’t happen. However “Avenged” is filled with cruelty, brutality, grittiness and blatant sadism.

The acting and directing are quality. Michael S. Ojeda is a true talent with the gift of telling a really high-octane, and twisted story. The characters and situations are emotionally driven and effectively pull on you to feel and relate to both the horrors of man and the suffering of humanity. As “Avenged” gets into the crux of this supernatural-revenge legend-and legend is what Zoe is-some of that “human touch” gets lost in the intensity of the action and gore that permeate through the film. It isn’t really a bad thing, “Avenged” morphs into a major action driven, splatterfest of thrills.

The special effects are pretty awesome. Some moments seem to fall a bit flat when it comes to realism, but for the most part “Avenged” will excite any gore, and blood thirsty horror fan. There is some CGI mixed in but Ojeda seems to have an understanding of what is a healthy balance of its use. The CGI is blended effortlessly in most of the violence-rich scenes. A couple of times it looks kind of The Asylum-ish, but honestly there is so much visceral, raw carnage that uses practical effects that the CGI is more than embraceable by the “Purist” horror fans. Overall “Avenged” is a worthy supernatural-exploitation mashup that entertains on pretty much every horror level.
Posted by A Southern Horror Fan